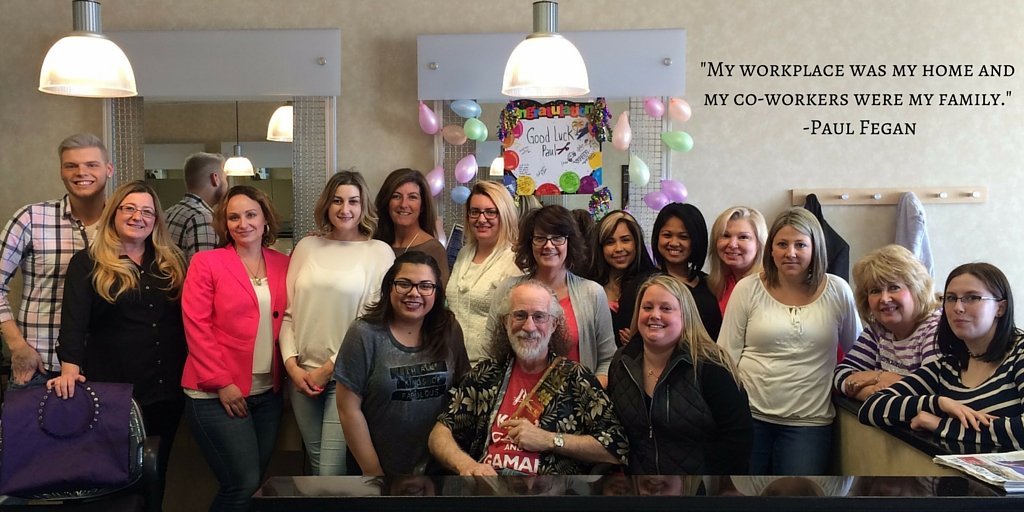 We would like to take a moment and congratulate Paul Fegan on his recent retirement! Paul has been with MjjM Salons for the past 21 years. He has been a loyal employee who has given his time, love, and dedication to cosmetology and our Supercuts salons.

Not only did Paul dedicate 21 years of his life to MjjM Salons, but he did it with a constant smile and positive attitude. For Paul, if he was able to serve a guest and help them leave happier than they came in, he was doing his job correctly. When asked about his favorite memory at Supercuts over the years, Paul told us about his experience helping a younger customer face his fear:

“There was a little boy who came to me who had the worst time getting a haircut. His mother would sit with him and pin his legs and arms. He would squirm and toss about and make it difficult for me, his mom, and himself. One day he came to me and asked if I could cut his hair ‘soft’. I told him I could do that  if he helped me. If he sat still and told me when I was hard, I could cut his hair soft. We made a deal and agreed to work as a team: he sat still and I cut soft. It worked for us. He sat there tense and solid as a rock and I cut his hair. This little boy made a decision to control himself and with fantastic self-will was able to overcome his aversion to getting a haircut. I was honored to help him attain a powerful life skill.”

It was the little encounters like this that made Paul’s time with MjjM so special. When faced with tasks and challenges, he had the support of “at least 100 sisters” to help him grow professionally and personally. He used the term ‘sisters’ to describe the progression of his co-workers into lifelong friends. Paul captured the essence of MjjM perfectly by saying that the workplace transformed into a home and his co-workers became family. He considers himself blessed to have worked for MjjM Salons for many reasons. The consistency of dedication to service was important to Paul. “Supercuts is dedicated to serving its franchises. One of those franchises is MjjM Salons, who is then dedicated to serving its employees, who then are free to serve their guests.” By dedicating himself to the service of others, Paul has left a lasting impression on his co-workers, guests, and all of MjjM Salons. He will be greatly missed in our North Andover Salon, but we wish him the absolute best of luck in his next chapter in life. We hope this new and exciting endeavor only brings happiness and sunshine to him!  Enjoy your retirement, Paul!